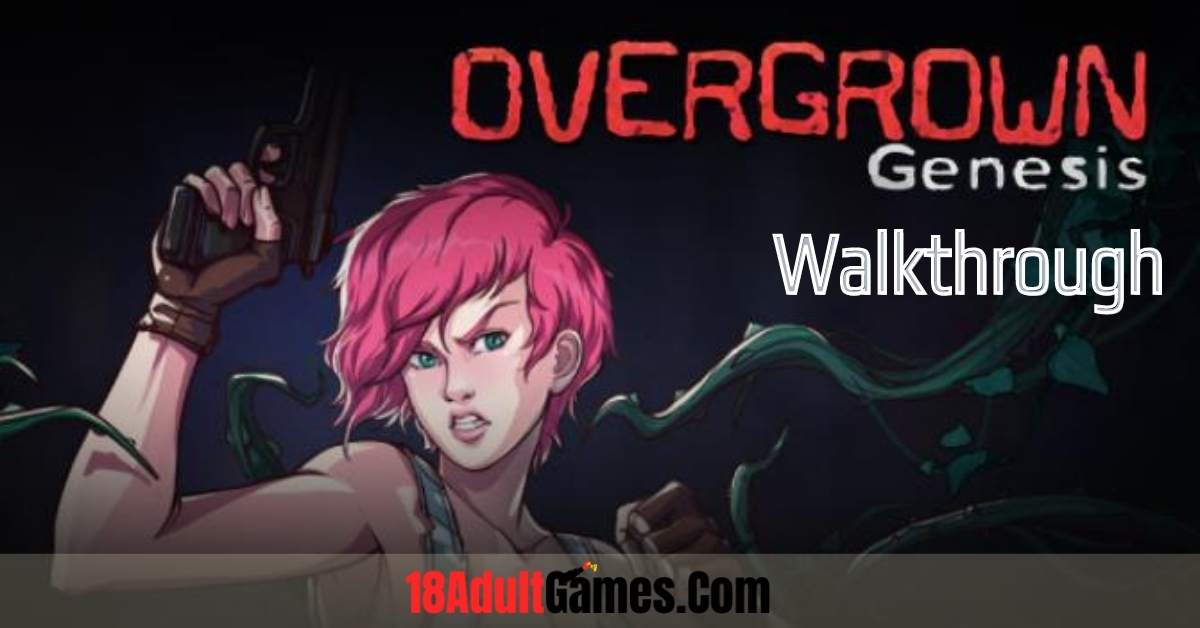 Overgrown Genesis Walkthrough & Ending Guide: This is the gameplay of the Overgrown Genesis game developed by The Dystopian Project (An Adult Zombie Horror Game). Juno is a young and hot girl who has to survive in the zombie apocalyptic world. She has to survive not from the virus but from the lust of zombies. Yes, these zombies are different, they don’t bite women, they fuck them and breed new creatures. In this world, most of humanity is dead so morality is also dead. Juno has to find the cure of how to wipe out this infection. But she also has to survive from the men as they also want to have sex with women.

This is the complete guide of Overgrown Genesis. With the help of this guide, you can play this Zombie Game in a very easy way. In this guide, you will be shown how Juno (Heroine Of This Game) progresses in this game and reaches the end of this game.

East Greer – Find Donny in Act 1 and deliver the Suicide Letter to him.
*(Must read the letter to acquire the quest/dialog option)*

East Brookside – Speak to Natasha during Act 2 and save Rebecca

The Shelter – Discuss the Shelter’s needs with Sofia, Cassie, and Natasha

B3 – Retrieve and bring Dr. Zara’s research to General Hawke

Note 1(Forlorn Notes): Leave your house and go into the Suits HQ, walk right into the bathroom.
The note will be next to the trashcan.

Quest note 1 (Suicide Letter): After being cornered by Gavin n co. at the electrical station, make your way into the crawlspace to the left and pick up the note, Read it to unlock a dialog option later with Donny in the next area.

Note 2(Bloodied Notes): After using the crowbar to clear the rubble in the subway station, the note can be found on the dead guard.

Note 3 (Disturbing Notes): Can be found in the room with David after bargaining for the Subway Key.

Note 4 (Messy Notes): Can be found in the hospital after acquiring the medkit.
*Be careful not to leave the room before picking it up because you won’t be able to return.*

Note 5 (Tattered Notes): Can be found in the boathouse after leaving the post-subway area by boat.

Note 6 (Indignant Notes): Head into the sewers south of town and go up the ladder between the entrance and the exit. The notes can be found on the body in the room.

Note 7 (Crumpled Notes): These notes can be found next to a body in the water treatment plant for Sofia’s quest.

Note 8 (Yellowed Notes): This can be found in the Dean’s room during the University sequence, the key can be found on the body next to the Dryad when you walk in.

Ending A: When given the option to give the HAF sample, give it to Dr. Zara

Ending B: Get caught by an ACE drone after giving the HAF sample to Dr. Fareinstein and going into the warzone area.

Ending C1: Give the HAF sample to Dr. Fareinstein, clear the warzone stage without getting caught, choose the option “nod head” during the trial and choose the “resist” option.

Ending C2: Give the HAF sample to Dr. Fareinstein, clear the warzone stage without getting caught, choose the option “nod head” during the trial, and choose the “Accept regime” option.

Ending D: Complete the three base building sidequests without asking the soldiers for “favors”

Ending E (True Ending): Complete every quest/sidequest (19 total), complete the three base-building sidequests without asking the soldiers for “favors” and acquire all 8 notes scattered throughout the game. (*Cannot be completed if you use the cheat room to skip to West Greer as you miss the first note*)

So I hope you found this Overgrown Genesis Walkthrough helpful. By the guide, you may clear the game and may reach the end of the game and very easily. Remember the points of the walkthrough.